If a friend of yours offered you a gamble on the toss of a coin where you could lose €100 or win €200, would you accept it? Many of us probably wouldn’t. But if you were offered to make one hundred such bets, you would probably be willing to accept it, since most of us see that the aggregated gamble of one hundred 50–50 lose €100/gain €200 bets has an expected return of €5000 (and making our probabilistic calculations we find out that there is only a 0.04% ‘risk’ of losing any money).

Unfortunately – at least if you want to adhere to the standard mainstream expected utility theory – you are then considered irrational! A mainstream utility maximizer that rejects the single gamble should also reject the aggregate offer.

Expected utility theory does not explain actual behaviour and choices. But still — although the theory is obviously descriptively inadequate — economists and microeconomics textbook writers gladly continue to use it, as though its deficiencies were unknown or unheard of.

That cannot be the right attitude when facing scientific anomalies!

When models are plainly wrong, you’d better replace them. Or as Matthew Rabin and Richard Thaler have it:

It is time for economists to recognize that expected utility is an ex-hypothesis, so that we can concentrate our energies on the important task of developing better descriptive models of choice under uncertainty.

Yes indeed — expected utility theory is an ‘ex-hypothesis.’ Or as Monty Python has it: 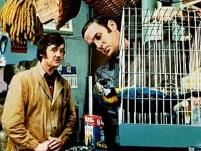 This parrot is no more! He has ceased to be! ‘E’s expired and gone to meet ‘is maker! ‘E’s a stiff! Bereft of life, ‘e rests in peace! If you hadn’t nailed ‘im to the perch ‘e’d be pushing up the daisies! ‘Is metabolic processes are now ‘istory! ‘E’s off the twig! ‘E’s kicked the bucket, ‘e’s shuffled off ‘is mortal coil, run down the curtain and joined the bleedin’ choir invisible!! THIS IS AN EX-PARROT!!

An ex-parrot that transmogrifies truth shouldn’t just be marginally mended. It should be replaced!

The drunk looking for the…

Inflation is not necessarily due…

The algorithms of wealth accumulation

Economists have no ears

Politics in a Podcast –…